Our team consists of dedicated individuals who are kind, friendly, and caring with a love of racing and a love of GOD.  Our team seeks to advance healthy relationships between fans while supporting Christian standards and beliefs.

To share the love of Christ with all people, communicating the everlasting gospel, leading them to accept Jesus as personal Savior.

Our sense of mission is driven by the realization that every person, regardless of circumstances, is of infinite value to God and thus deserving of respect and dignity. Through God’s grace every person is a gift to be valued

John, who used to lie on the bootleg beer in the back of his father's truck, would take a different road to glory. Not one paved with asphalt or filled with cheering fans, but it would lead to the ultimate Victory Lane. 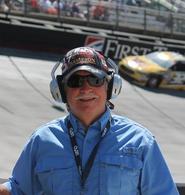 Born in a tavern,  John Earnhardt  was delivered by a praying Adventist nurse. Growing up during the early days of NASCAR, he spent much of his childhood playing around a racetrack with a boy named Dale Earnhardt. Both boys had blue eyes and brown hair. Many people thought they were brothers. Both families were bootleggers who became racers. But how different would be their destinies.

Little Dale would become known as The Intimidator and be immortalized as a legend in NASCAR racing, savoring 76 wins in Victory Lane.